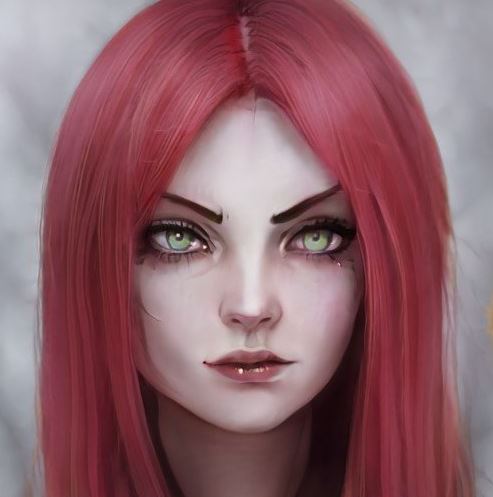 Biography: Zoe Smoker grew up in a wealthy family. She had no worries in the world, no consequences and her parents sheer unlimited amount of money. Spoiled by her parents, she neglected school and rather spend her days wandering the empty streets of Louisville at night, drinking, taking drugs and causing trouble. This went on until her 18th birthday on which her parents had enough of Zoe’s shenanigans. Getting kicked out didn’t seem to bad at first until her saved up money started to run out and her addictive behavior only got worse. Within a month, Zoe lost her home, her family and her friends. She began wondering Kentucky on foot, resting in abandoned or industrial buildings until she found herself in Cedar Flats. This ghost town seemed like the perfect place for her to set up camp as it was far away from any danger, abandoned and quite enough for her to find peace. She spend her days smoking weed and drinking until even her drugs ran out. With nothing else to do, no money on her and to embarrassed to return to her parents, she wondered around Cedar Flats. Nothing to live for. The end of the line. The scary thought of death seemed more like an ever creeping promise of relieve from her past actions. The only thing distracting her from her grim thoughts had been the books she read and the view cars around Cedar Flats, which she repaired in the time she wasn't tripping.

Zoe didn’t even know about the outbreak until one month after it happened. When her craving for booze led her to Riverside, she used the situation to her advantage and got her hands on an entire liquor store worth of beer, wine and bourbon. Restocked with alcohol, her will to live started getting stronger again. With civilization falling apart, she took the opportunity to gather up resources and restore the broken down house she calls home from now on.
“Maybe this isn’t so bad after all?” she thought to herself.
“Maybe this is how it was always meant to be.” Zoe took another big sip of bourbon out of her bottle.

Personality: Even tho she lived on the streets for almost 3 years, Zoe still carry's a bratty attitude with her. She makes a confident impression and won’t censor herself for anyone but still tries to stay polite. Zoe is heavily addicted to booze, weed and cigarettes. The more stoned or drunk she is, the less she fears the undead or any consequences. Sobriety on the other hand makes Zoe a shell of herself. She is capable of defending and taking care of herself but is deeply hurt inside after her family and friends abandoned her. No one ever loved or cared about Zoe. So she had no reason to care for others… until she met Sunny.

Appearance: Zoe Smoker is a young women in her early twenty's. Her red hair goes down to her shoulders, barely hiding a scar on her left cheek. She is pretty looking but her years of drug abuse are clearly visible by her tired looking eyes and pale skin. She is skinny yet strong looking and stands at a height of 1.70m. Her voice sounds soft, yet a bit smokey.

I never really was much of a diary person. Back when my parents send me into rehab for the first time, they forced me to write one every day, to track my progress. I fucking hated it. Burned it after a week, right before leaving rehab on my own behalf. But things changed.

Its been over half a year now, since the outbreak happened. When my parents kicked me out and disowned me, I thought it couldn't get any worse but I was wrong. I was on my own, which wasn’t anything new as I had been living on the streets for quite a while now. People out here only care about themselves so I started to steal from houses overtaken by the undead. I managed to get a good amount of booze, cigarettes and food to get me thru the first couple of day but I had no place to stay. The constant fear of getting mugged or robbed lead me to a small, abandoned town named Cedar Flats. The area seemed to have been abandoned long before the outbreak so I had a good feeling about staying there. No one would find me here any time soon.

Its been a rough couple of weeks for me. All I did was staying inside, drinking and reading some old books that the previous owner left here. I think he or she was a mechanic. They left quite a few magazines here too. I was always interested in cars, especially street racing, but never had the chance to do any real work on one. There are a couple of old, broken down cars here in Cedar. Maybe I can fix some of them up? I got nothing better to do anyway. So might as well just do that until I finally drop dead. This isolation is different from the one I am used too. At night, I feel like I hear the forest whispering my name. Maybe its the comforting darkness that pulls me in. I don't know anymore … 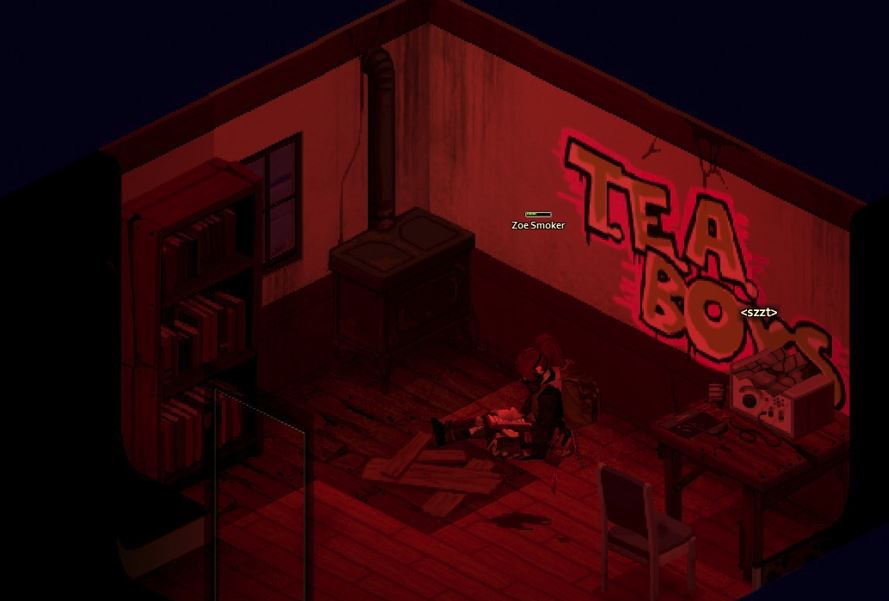 Its been over 2 months since the outbreak started now. My supplies on liqueur is running dry and I am almost out of cigarettes. Things look dire for me. Either I go out to Riverside and search for more supplies, or I find enough courage to finally kill myself. The peaceful quite of death is starting to look more like a promising escape then an inevitable end. I never had a purpose in this world anyway. Now that everything is doomed, might as well take the easy way out.

Good news on the other hand, I got one of the cars working again. Before I off myself, I might as well drive down to Riverside and take a look at the liqueur store. Maybe there is something to get there…. I really am a coward, ain’t I? Not even strong enough to kill myself. God I hate myself for that.

Shortly after my last entry, I went down to Riverside. I thought driving could help me distract myself from these nasty voices in my head. It actually helped a lot. Best thing about my trip tho, was that the entire liqueur store was still filled to the brim with beer, bourbon, whine and even two hole cartons full of cigarettes. Plenty to make myself numb enough to keep going. When I woke up the next day, I noticed a that someone took my toolbox out of my trunk. I know that I never took it out. Someone must have been here. Ill have to keep an eye out.

Okay. I know which fucker took my toolbox. A guy named Laz left a note at my front door. He didn't seem to speak English very well, at least that's what I got from his handwriting. He stated in his note, that he borrowed my truck. When I checked it, the hood and engine where RUINED. Ill need to have a word with that guy. It seems like he moved into the house next door. If he touches my stuff again, im gonna kick his ass.

Today, as I was driving to the near city of Ekron, I met a guy named Hadworth. He seemed like a nice guy. Very helpful. He gave me a walki talki to communicate with him, if I ever needed help. From what I could understand, he is a ranger, living in the Country Club area. I don't get along with cops for obvious reasons but a park ranger cant be that bad, right? Besides, he offered me a lot of weed for some repairs on his truck. Who am I to turn down weed?! I repaired his whip and went back to Cedar. From all my trips to the city, I was able to gather a good amount of food and tools. I even hit a gun store to the far south of Cedar and hit a motherload of ammo. I don't have any guns, but I might start tinkering a little. Maybe I can make my own iron from scratch…

Today, two people unexpectedly showed up at my doorstep. A guy named Rox and a girl named Sunny. At first I was very skeptical about them. I don't like having people around. Especially strangers, who just want my food but something felt different about them. I offered them to stay the night at my place. We chatted for almost the entire day. Rox was a scrapyard worker before the outbreak. He is very handy with metal and cars. Just what I needed. Someone who could teach me how to weld properly. Sunny was a barkeeper at the Country club. She cooked us food for letting her stay for the night. She made a stew. Dunno what she put in it but something about eating a fresh meal that isn't from a tin can, really shook me up inside. Its very uncharacteristic for me, but I offered them both to stay at my place, until they got there shit together. I got an idea in mind but need to work it out, before I tell anyone about it. This might be a good way to get supplies without having to risk my live.

Alright. Its official. Sunny, Rox and I are starting a Food truck business. This might sound like a stupid idea, but it really isn’t, if you think about it. People out there are tired of eating canned beans for weeks. Sunny made some Pie for me to try out. It tasted GREAT. I got a good feeling about this whole business plan. All we need now, is a caravan to prepare all the food in. Lucky me, found one just down the road to Ekron. Ill try to set everything up so we can leave in the next couple of days. This is gonna be fun, I think.

Having Sunny around made me feel different to my approach to other people. She is such an optimistic and lovely person. She seems to care a lot about me. But why? I never did anything to her that would make her want to be my friend. I don't deserve this.

Our first trip with the Food truck led us to a town called Dixie. It was a trailer park before the outbreak but a family by the name of Goodall fenced up the place quite well. We met the major of the town. A guy named Kurtis. He seemed like a very nice man and his family is lovely. We sold a lot of pies and met a lot of other survivors. I never knew there were still so many in Kentucky. Sunny and I are glad about our first successful trip. It was really energy draining tho. Sunny slept the whole way thru the ride back home. Something about her sleeping on the passenger seat made me feel more comfortable then all the booze and drugs ever could. I feel weird. I need to sleep over this.